All Hands on Deck Brut IPA

All Hands on Deck Brut IPA (6,5 % ABV) represents the modern brut IPA style. It has a very dry finish, easily drinkable and yet, strongly hopped.

The word brut in the name of the style refers to the world of champagne, where it is coined to mean dry as in low in sugars.

These beers are called brut, very dry, because of an enzyme added to them after brewing. The enzyme breaks down sugars that are in the beer after yeast has done it's tricks. Typical beer styles to have this enzyme used in them are heavy imperial stouts. When it's added to a beer naturally low in leftover sugars, it makes the resulting beer light, dry and easily drinkable. 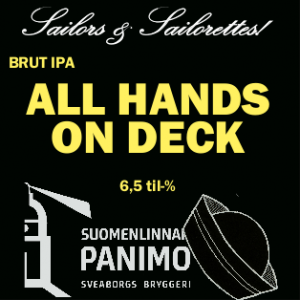 All Hands on Deck!

Suomenlinna Brewery's Brut IPA respects the style's summery feel and easy drinking qualities. It's hop profile is very fruity, you could even call it tropical.